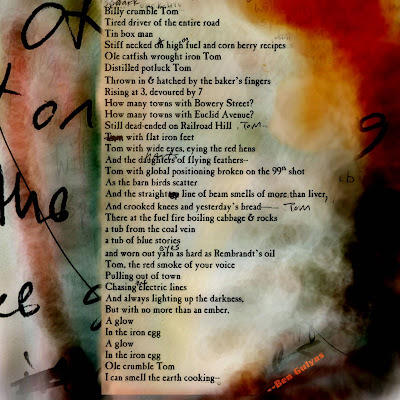 many of my printed pages end up this way, covered with alternatives and other notes-- I left the writ scrawl in there because that's how I often work from the page-- an imperfection that is real-- a snapshot of the alive process, in process-- you might be right though-- it might be better just typed as a finished piece-- but I do like the hand written bits in there visually-- huh-- thanks for the sharp & questioning eye--

i like the handwritten bits in there, too. makes an interesting visual in the border of the broadside. "snapshot of the alive process..."

given all that snapshot stuff, we STILL don't know where in the process THIS version occurred... i am left to wonder many things, among them "did he ever finish this poem?" ... i'd prefer the self-indulgence of depicted process be chokered out of the finished visual frame, so that the actual achievement of the poem as completed visual broadcast be the engagement that i, as the poet's witness, be presented with & have the pure challenge of engaging.

fair enough-- but I never do finish a poem-- it's just a starting off point-- if I could transcribe a crumbled fire... ...not to care of one's own body in the warp of time-- (but still, why throw that out to others? well, that's again a fair enough question--) yet desintegration is as point perfect as the Old Man of the Mountain, of which time and weather switched that which would be, to that which suddenly wasn't-- (but to present it with seeming uncertainties is to present it with seeming self indulgence--) on the other hand, I've seen many a poem typed down in a way that (to me) doesn't flow, doesn't breathe... and thus wonder, how were they deciding on that? (well I don't mean it, nor take it as self-indulgence to observe alternative possibilities arriving together on one page-- the crumbled mix is a natural occurance...) and to that, your precious heart notes as witness, and my heart does concede, it's messy...-- it's love above all-- love of mess and crumble and the rough combination of all it--

You know how many folks write poetry, just in NEOhio ?? Let alone between Cleveland & Athens, Georgia, not to mention arcs that
head to the furthest boundaries of the Republic... that's a lot of crumbled-fire word artifacts, my brother --- you could papier mache a dome over the entirety of Lake Erie with unfinished poemetry... you'd probably have enough absorbant detritus to soak up most of the BP oil spill ! Hell, you could sail a frisbee of the stuff from Cleveland Heights to Peebles, Ohio and make all the citizens beneath that azimuth think it's midndight at nigh noon ! Yeah, "self-indulgent" is the term.