In Defense of Lesser Poets Like Myself / Mark Flanigan 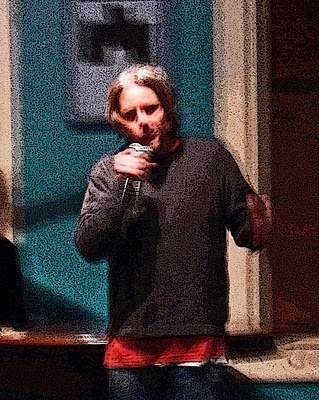 Our failure is not a failure
at all, merely
a last-minute train ride
without tracks, destination?:
Atlantis, a place no longer
believed in; it’s like
an unpublished page, a lecture
in an empty auditorium
without either sound or light;
it’s like a body
pulling on a rope
with a weight
twice its own,
the quarry unknown
and unknowable.
It has something to do with
no longer being able to
know or believe in
the whole story, understanding this
limitation, a certain acquiescence,
relying only on instinct, intuition—
and we take these small things
and we speak of the little poetry
that still blesses our lives
and though it may not seem like much
standing, as it has to, next to
a full-scale map, albeit one
of a smaller world,
no it may not seem like much
to Homer or Milton or Shelley
but all the same, somehow,
it seems like everything
to us, the lesser poets,
these small moments stamped
into Time’s sands,
futile footsteps made surely
to be washed away by the tides
of Poetry,
when, at last, It shall
sweep clean our landscape
one final time, disappearing,
and taking with it our
last vestige of Truth
last trail to Perfection
last guide to Atlantis
last Poet,
whether epic or lesser
no longer being of concern.
Posted by Word of Mouth No comments: 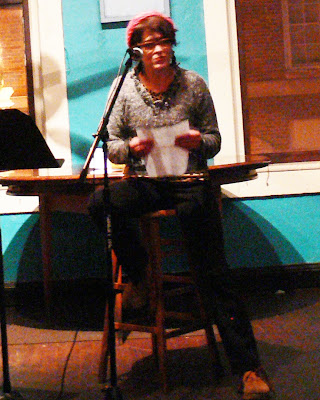 Marta needed words. She always needed words. Words to describe, words to run words together, to be, to do, to move ahead. Sometimes there were plenty and she wondered where they came from; these were moments of rare pleasure, delight on the abundance and wonder. She wanted to use English as she did Spanish, because she loved both, but the words in English showed up in unpredictable and arbitrary ways; English was not her first language. What is that she did that triggered language and opened the passage of thought? What was the trick? She knew the words were there.
The fact was that Marta’s experience of language was never the same, and she felt, different. Her language was different. If she spoke English or thought in Spanish, she seldom planned or knew. Code-switching, Spanglish, easy, hard, fluid, obscure, you are, you are not, you are a maybe. Condemned to partial thoughts and scattered language, scattered voices, she wondered who she was. Contemplating her chameleonic traits, she asked: “What would be like to be me?”
Marta liked to take notes, verbatim, and analyze others’ discourse, stealing, borrowing, in an attempt to appropriate the words, the phrases, their implied meanings, as her own. Not any words. Just those pronounced with meaning. Meaningful meaning. Extending the boundaries of her own thoughts, intentionally, for the sake of identity, power, and voice, she felt ethereal; like clouds passing pushed by external forces, partial, broken, incomplete, unfinished, defective, transient, temporal, undefined.
She did love both. But hated her opaque Anglo tone. What would be like to have words flowing with an oily pace and a shiny sound, to speak free of extravagances, that accent, that pose, artificially and forcefully manufactured, composed and produced? Maybe she could use a permanent marker and define her “silueta”, delineate the vocal boundaries and make all clear. What would be like to be the others?
Become just one.
Whole.
Pure.
Intact.
Definite.
Defined
Solid
Exemplary
Permanently herself.
Become just one. Just one. One. Defined. Permanently self. Limited. She hunched under the weight, felt oppressed, caged. Reconsider.
Posted by Word of Mouth No comments:

Thanks, But No Thanks / Grady Thrasher 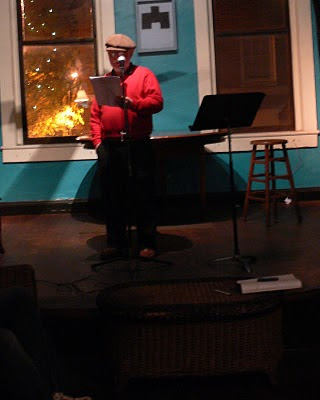 Thanksgiving Day — "By resolution of the United States Congress in 1941, the 4th Thursday in November shall be observed as a legal holiday for giving thanks for divine goodness."
Dear strange newcomers to our land,
Thanks, but no thanks for helping reduce
our population in the New World
to a manageable size.
Those nice blankets you gave us
In exchange for much of our hunting grounds
were warm and comfy,
but we could have done without
the infusions of smallpox, influenza and measles.
Thanks, but no thanks for introducing us
that swell fire-water--
“Whoa! Is that really my signature
on that treaty
that gives you all our ancestral lands?
I never remember a thing
after the second drink!"
Thanks, but no thanks for broadening our horizons.
We had no idea those desolate deserts
and frozen prairies west of the Mississippi
could be our new home!
When you said you made reservations for us,
we thought your were taking us to dinner.
Ha! The joke’s on us.
Must be that fire-water again!
But, wait! We’re doing all the
Thanks, but no thanks-ing.
Don’t you remember how we taught
you white people not only how to grow corn,
but how to grow and cure tobacco, too?
How’s that for some “divine goodness?"
Go ahead. Take a cigarette break.
You deserve it.
And Happy Thanks, but No Thanks Giving Day!
Posted by Word of Mouth No comments:

In the season of cold goose / ben gulyas 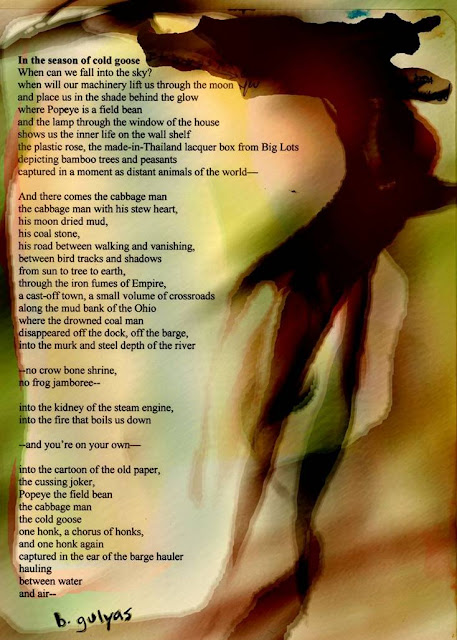 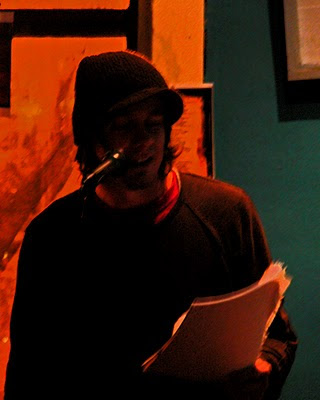 is only
a necessary Art
after one no longer fears
being let go of
first.
it is a strength
that cannot be manufactured
it is a strength
no one, not even I,
can teach....
and yet, you must learn.
it is forged through
desperation
still, it is a strength
one
stronger than yours
and in the end
it will be met
by someone,
or no one,
makes no difference which,
this strength will not budge,
knows not of compromise....
it is not a match
awaiting friction
it is not fire
inspired
to light
it is something else
something you know
knew
are reminded of
even now
it is something
to be forsaken
for as long
as you can afford to
while time, my friend,
is nobody’s friend
and faith
can only be returned
from whence
it was first sent.
go now.
Posted by Word of Mouth 3 comments: