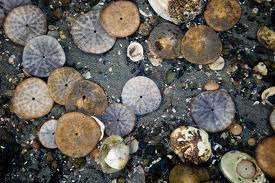 The beach was theirs,
their radial bodies
all over it for
as far as human eyes could see.

They made their plan
mad as hell at us men,
for who knows what?
Pouring plastics and petroleum into their world, perhaps,
dredging the seafloor.

Stupid Echinarachnius Parma,
What'd you think you were going to do,
climb up our legs and into our throats?
Lodge in our feet and cause an infection?

No, there you are, bleaching white,
lining the shore like
skulls of coins.

The mermaids and the people of Atlantis are now in an economic
collapse.
It's their dead money all lining the land of the living. 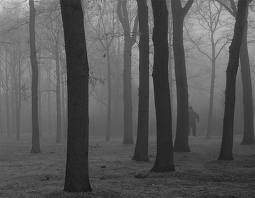 When I discovered, silence
was the thing to be sought,

not evidence, but still
I stayed in the woods,

waited for nothing
to to step out,

sloped up and sat down,
reached out his long arm.

No fear between us.
Of course he'd seen airplanes

highways even
where the earth bled metal
through hard arteries.

to become the myth.
Posted by Word of Mouth