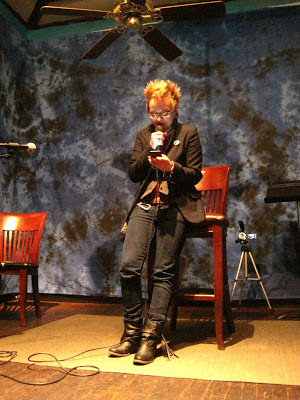 From the moment I said goodbye I wanted to say hello again to
you. That goes for last year and tomorrow too. Even though tomorrow isn't promised. Even though promises are broken.
There's lists of words that I have. And they all fit inside of my head. When I stare out the car window, as the trees go by, and you take my hand, they fall around me, like leaves to the ground.
One time, in one of my many lives, I was the wind. And when I was the wind, you were the ocean. I tore storms into you. But I relinquished the wind. I gave it up so I could have this body. And you were still the ocean. I walked into you with saltwater tears and apologies and they swam away from me. You were warm, and I could feel my fingers thread through you like laughter and those moments of happiness that always seem too good to be true.
You could sink me. You might. But If anyone could claim me, it would be you. I would settle to the bottom there, my lungs useless and dying. But I know that I would be settled there, my tears, not a stranger to these saltwater depths.
There is a crisp promise that I can make. One that won't be broken. One that wont be bent. One that won't just fall away and crumble. One that just is.
It just exists. Like the wind and the ocean. And it's here in these bodies that it lays, twisted around this spine. In these veins. Written on my ribs. And in the palms of my hands and sleeps in my ankles. No wound that I would ever endure will break it. No death could ever claim it.

And it's that I love you.
Posted by Word of Mouth