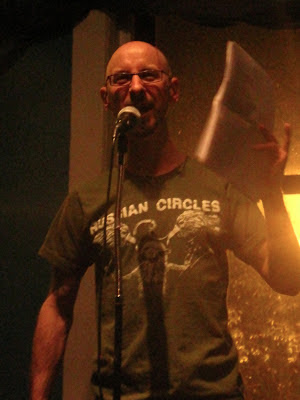 Friday the 13th the Final Chapter
was only, like, three films into the franchise.
By now Jason's been to outer space.
He's fought Freddy, and not even in his sleep,
enjoyed the magic of CGI
killed through crowbars in the eye,
attacked despite axes in the back,
never mind that a split spine
would cause paralysis
or that nothing like eyes could possibly remain
in those holes, no rods nor cones
how does he see?
Same basic plot:
group of teens in heat
finding themselves separated
at best in naked pairs
to be startled and skewered
then stare straight ahead
as a meat-shedding latex head.
Really, a deformed bald boy
breathing somehow
in a murky lake is now hatcheting sexy astronauts?
The old superstition on which this bullshit is based
long since forgotten
the slaying taking place well beyond
Saturday the 14th and its impossibly well-lit night.

No wonder so many still watch when
those politically pissed off, pink-headed pricks
contradict themselves again and again
on every matter of life and death.