"Even Though" - Larry Sheats

"Even Though" - Larry Sheats 
I’m demented from exhaustion again.
It’s 5 am, and my conscious mind
is scaling my skull to find its own kind.

And I think I’m turning
wild in this wilderness,
tired of restlessness—
everyone’s abandoned the roads.

The wind rolls in like tides, like sin—
and I’m stalked by eyes inside these lines.
I want to run, erase all of it—
but I’m caged here till time unwinds.

So I’m fighting fear,
fighting tears tunneling my ears,
fighting demons that fill the stability
they’ve prescribed me over the years.

And those screams in last night’s dreams
lead me past the graveyard path tonight
where my goals and plans once traveled my head.
I’m unraveling sanity, tossing in bed.

I’m desperate to settle down my bones,
desperate for eyes to close,
so I can float in my ocean of sheets.
But even when I finally sleep,
my mind still roams the streets.

And I’m trying to sleep.
But I run through rooms
where lights are flashing.
I’m smashing through doors,
soaring over the floor,
twisting through carpeted corridors,

fleeing a roar, my folks screaming whore,
I’m unsure if I’m awake or asleep.
And even weed doesn’t seem
to work anymore. . .

Flooding blood swells around me.
Hell pulls me down to drown me
in the soundlessness of coffins
sliding out to sea.


"Ambient" appeared online at Red Wolf Press (Australia) in November 2013. Catherine Zickgraf, aka Catherine the Great, was February's featured reader at Word of Mouth. She has three spoken-word DVDs, the most recent being Burying the Clocks.
Posted by Word of Mouth 1 comment: 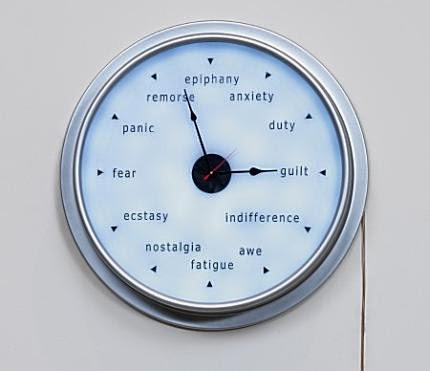 The maniacal Netflix masturbator sits on his third generation Ethan Allen sofa at three o'clock in the morning earning his title.
"Yeah" he grunts. You know exactly what I want. Start me off with three episodes of The West Wing and finish the job with the last ten minutes of The Breakfast Club."

Is there a person beneath this amorphous amalgamated monstrosity of stuff?

Dad.
The parental pylon.
He declares that he is a father in the same way that chartreuse declares itself to be a color.
Dad is bad.
Dad has a girlfriend.
Hop on Pop.
He has a girlfriend and a library of cologne and secret apartment. It sounds much worse than it is, plus he can justify it.
You see, dad is sad.
Dad is housing this infinite sense of longing and regret
contingent on things and people he has never seen
He wants something indefinite and shapeless
something he does not have.
something he has never had.
This is a fleeting feeling that establishes itself in vague, concentric pulses that orbit around his solipsism.
Dad is alone.
Dad is sad.
Dad is bad.
Life is sad.
Life can be bad.
Heretofore Life is Dad. Et Cetera.

This prompts him to take action
He goes on LinkedIn while he’s drunk and attempts to maneuver an interview for a sales job at Godiva, despite the fact that he is lactose intolerant and has a master’s degree in Psychology.

He gets red-carded by his secretary for sexual harassment after watching too many episodes of The Office, and then tells his wife so that she will trust him.

He uses his connections and fourth generation smartphone to teach a class at a local college and type a syllabus, respectively.

Hi! My name is Roger Fairfax, but you can call me Roger. My office hours are MWF from 3 to 5 inside of my Kia Rio which is currently parked in lot purple 22 at Sea World.

Between class he exchanges self-serving pedagogical philosophies for cigarettes and oral sex, but only until he gets bored with the job and resigns after one semester.

In a few years, he will retire to the third generation Ethan Allen and spend his days idly retweeting articles from The New Yorker in an attempt to bridge the gap between cultural relevancy and pretentious worldliness.

And then the daughter.
The self-involved, static-haired, sandle-faced, asshat academic suckup
Everything she says coming out in that really irritating
overtly blatant
exposition-of-a-high-school-play type of manner

She sets her entire resume as an email signature, like a passive-aggressive reminder that she is alive

Toes dipped in paint, face in wax, head inside of a trash can listening to NPR on the way to the animal shelter

She looks like a Barbie doll that slept in the dishwasher

Can’t you tell by her Princeton Lacrosse sweatshirt that she is going places?

But Mom
Mom’s New Year’s resolution is to shed all notions of self and image and any conglomeration of the two and become a skeleton,

So that finally, without eyeballs or organs or life, she can sleep and forget about that family portrait hanging in the attic, getting uglier by the day.

from "Waiting for Ralph at the Milner Grill" - Aralee Strange

... Just goes to show you the power of words why you can build bridges with them if you just believe I believe I believe in love I believe in the innocence of animals I believe in dancing one two-three one two-three to a world waltz beat I believe lame Beauty could tame the beast in me but all I can say is May I have a cappuccino please? And Ralph commences jamming bandy legged and jive in another tongue Can you clap your hands (clap our hands) Can you stomp your feet (stomp our feet) Do the right words come when you need ‘em? Well drum! jump and cook a gumbo Free! all the deep down held back among you Allow it release! the one thumb piano plunk on a Sunday tambourine thumping ring around the shakey Pole who is unafraid exposed whose language transcends All do lament! another good man gone (to hell probably)  Whose slit throat bleeds Whose black skin’s unseen bruise pains deep and overwhelms and  I may be high on cheap wine and caffeine but I swear I see pale Death flying out the win­dow flying over the used car lot flying across the unbridged flood muddy river headed west. Even Death has a home. And Ralph (yet untuckered) still stalking the wild improbable However you can man do you dig it oh ain’t it dandy (and I do) in all simultaneity and with silver tongue to sing “livid and aloud” ipso facto is allowed on the open read but try as I might I am just one more white cat on the conga line dancing to another man’s drum. Am I sufficiently engaged? Does my conscience work? When the right words come crude rude and dead on will I need ‘em? I have two good ears and listen. I have two good eyes and see. I have a mind that wanders how much pull blue yonder the wild turkey’s song (strong as gravity). ... And now Ralph’s working his way out there where the sun don’t shine and if we’re lucky he’ll come back singing looking to shake things up shaking things up better watch your back when Ralph’s around better mind your poetic skew and hew a new one everytime or why bother brother for we are Us here now and they are Them there then and the question before us is not when but How do we cross over if the bridge is blown in three sections and according to plan?

An excerpt from the prose poem "Waiting for Ralph at the Milner Grill" by Aralee Strange, which appeared in Evil Dog and is dated  8-27-92. The full text is  posted online with the following note, and appeared after Aralee's passing in 2013:" .. there was a piece by Aralee that could be described as a prose poem or a non-fiction narrative. I remember hearing her read it at a literary event. Where that reading took place I can’t say, and visually I can’t recall a single detail. I still remember, though, what it sounded like when she read it—and I’ll bet that anyone who’s heard her read can imagine what it sounded like when she delivered these words."
Posted by Word of Mouth No comments: 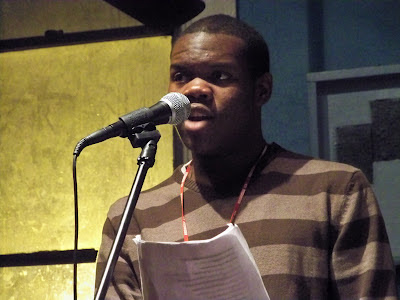 
You'll ask me why


I'll say it's because that's what I pretend to be


When I feel like the world is closing in on me


To meditate or medicate


That is the question


These hands are not my hands


These feet are not my feet


This heart is not my heart


They are the brick and mortar


I bought with my defense budget


This skin is not my skin


It's 7 inches of hard, cold obsidian


To fend off the inevitable irradiation of an erroneous environment


I'll tell you not to interrupt my existential crisis


It always will be


I'll tell you how some days


Every word said over me


And not to me


Whistles like the mouth of a warhead through the air


Terminal velocity until its detonation of impersonal conversation


When other eyes register my perimeter and then quickly look away


I feel like the landscape is splintered around me


The bombs go off in my vicinity


Disguising this test of endurance


As a test of luck


I'll tell you how some nights


I can sit in a room full of people


And feel as desolate


as the aftermath of a nuclear fallout


The ruins of my city


Populated by the inevitable irradiation


Of a macabre miasma


The smell of spoiled vintage


Around the halos of skulls long in the tooth


No longer aged and wise


As our vitality pretends we won't


As our mortality portends we do


I try to ward off the vapor


With the salts and silver smelted in


The enamel of my too short teeth


But they stay rooted in their canals


Guards of show, not of action


Wanting for hands to cover my mouth with


Wanting for feet to walk away


Wanting for a heart to pump life and color


To differentiate me from this silver haze


I have become a macabre monument


To edify this radiated ruin


Fluent in the language of light


I stood still in


You stand at my barricade


You look me in the eye


Then down at the weeds encroaching on my perimeter


In your presence, the weeds whisper flowers


Roses if you’re not


You rub your fingers gently along roughness of my rocky walls


Spread your warmth on the coldness of my obsidian facade


Press your lips against my door


Reminding me of my mouth


And with it, newly formed I ask you


Do you think you can love a bomb shelter?


I've even made it my home. 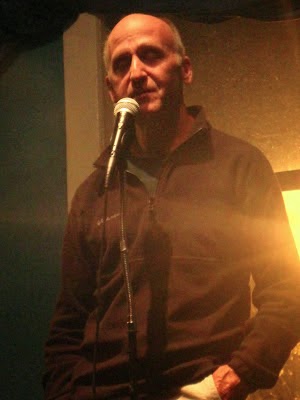 In air set sharp
against the stale drift
and sullen throes
of late stage February.

You would not call this tame day
mellow – that is past and yet to be –
but buried deep in dead brown
sameness, spirits gather.

I wish these days would hurry on –
my mother’s presence
pierces years to conjure sun
and wrap the world in warmer tones.

And I hear his gentle rejoinder
that soothing faux-scold timbre
tinged with a twinkle –
Don’t wish your only life away.

Dad was the ever-enduring hills
she an effervescent air-kiss
the smiles and dreams of springs to come.
Now both are gone.

Wishing with mother for
ever warmth and winter’s end
and feeling my father’s calm
as if from distance – stay, stay

Spirits of the earth and air
are washed clean in cold breeze
beneath the bare-branch starling tree
on catkin edge of winter time.