"Mom Explains the Scar on Her Wrist" - Chris Mattingly 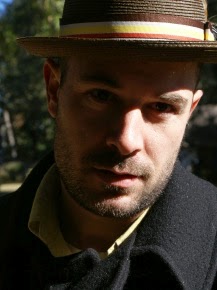 [Chris Mattingly is tonight's featured reader at Word of Mouth open mic upstairs at The Globe in Athens.]

Mom Explains the Scar on Her Wrist
(Chris Mattingly)

You were at the river camp, just drinking?
I was drinking Zima, sitting listening to the radio.
Curtis was inside passed out. I could see him.
I was right outside the living room window
Listening to the stereo trying to have a drink
When he smacks the window to scare me.
I was right underneath that window too.
So I jumped up and spilled my drink.
When he hit the window to scare me
I was staring at the sky thinking it’s never this blue.
I shot straight up spattered my danged drink.
I was fuming like gas I was so mad.
So I pretended to go back to that blue sky,
And sat waiting for him to pass back out.
I was burning up inside I was so irate.
But when I spied the cigarette smoldering
On his knuckle I knew he passed back out.
So I slapped the window and shouted Whatchit
Right soon as I seen the cherry sear the knuckle.
My hand shattered the glass and slashed my wrist
When I hit the window and hollered at him.
He was still passed out.  I could see him through
The blood shot window from my ripped open wrist.
All I wanted was to sit at the river camp and drink.

Chris Mattingly lives in Louisville and is the author of the chapbooks Ad Hoc and A Light for Your Beacon. His full-length collection is Scuffletown (2013). His poems have appeared recently in The Louisville Review, Southern Indiana Review, Margie, and Trajectory. Chris is also a banjo player and can often be found walking some section of the Old Wilderness Road. He has his MFA in Poetry from Spalding University.
Posted by Word of Mouth