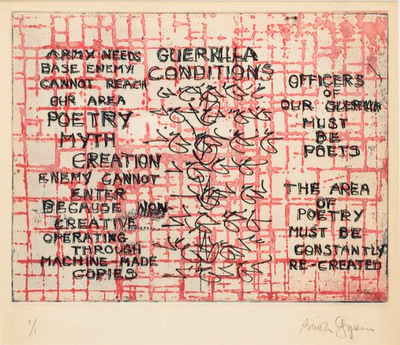 The blackbirds slip away.
They squeeze back into the unlightable.
A stuttering memory shivers the branch
winding from heart to throat.

Dark plumes, the timbre of your voice,
lost in the thicket, in the womb.
The Booth home for unwed mothers
in a Lyndon Johnson June.

You are still seventeen.
Your lock-pick echo teases from outside.
And I am bending wrist and soul to touch you through the bars.

I wait on the opening of files,
for a stark word or two paroled home, grey and weightless.
I fashion beads to count by
from downy barb and broken quill—
but bits of feather cannot ride the abacus wires.

And I am bending wrist and soul to touch you through the bars.

Soon I will leave this city of night.
I have dug the earth from beneath its promises
and my nose runs with its black soot, even in sleep.
But feeling is returning to my fingertips,
and light rises on the east wall.

Hollow bones and a passing winter.
Empty wires and the parting scars.
Dark plumed songs in the tunnels beneath me.

And I am bending wrist and soul to touch you through the bars.

PELEG HELD was a frequent reader at Word of Mouth from 2010-2012 who now lives in the northeast United States.  He lived in a commune for twenty years and is a former member of the human rights group Voices in the Wilderness. The art is a lithograph by Brion Gysin titled "Guerilla Conditions."
Posted by Word of Mouth