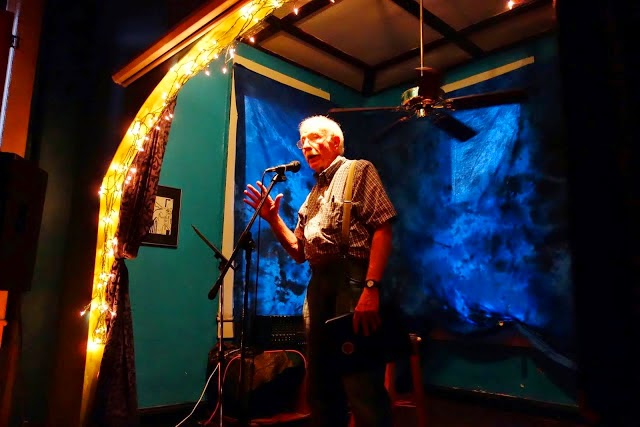 Already elderly he was not a man of words
even in his Genoese I understood well enough
sitting near the wells in local lots where
he grew fava beans, tomatoes and the rest
to sustain family and the Depression-afflicted
taking a few coins or none with cheer.

It was the quiet way he watered rows
with tin can nailed to long pole,
every plant part of himself extended
from his birthplace Fontanarossa.
It was the way he moved in black denims,
wide suspenders, old work shirt, dark-brimmed
fedora, and a spit of tobacco,
all a tale of struggle and hope.

Or I ran down the street to walk his bike
with lumber strips draped over seat and
handlebars with old rags, the final
march of the hero bringing tribute from
distant mills to honor hearth and its gods,
a ritual so common at dusk that only I
imagined passing under the arch of
small triumph with no need to call out
the rapid transit of glory and vanity:
the young garbageman with horse-
drawn cart now become old servant
with useful throwaways pleased to work
and see a playful grandson at his side.

Or standing in the basement doorway
on Pearl Harbor day, I asked for a dime
to go to the show, and how he would chuckle,
dig deep in a black leather purse
like a well-mustachioed Lombard prince
sending a messenger into a world
unknown to both before that moment.
I still see the chopping block, nestled
hatchet, kindling spread on dirt floor.
I smell fermenting grapes in oak barrels.

We talked mainly in a tongue of gesture,
of nods and smiles under raised eyebrows,
the language of early forebears
now remembered in sight and scent
more vivid than scholarly seminars.