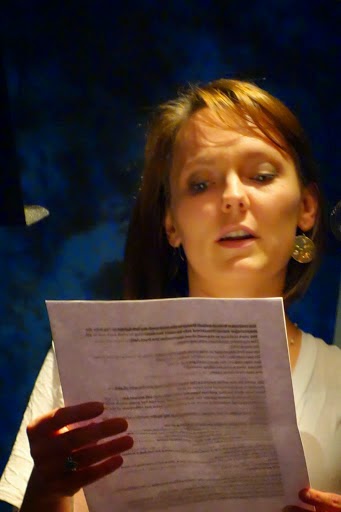 The poem I don’t want to write is sitting on the couch,
looking smug, sipping her third cup of coffee at 5pm
Go on, she says, I dare you
I raise my eyes a bit, but it’s like staring at the sun – too
hot, too bright, to close to searing my retinas
I blink away after-images of tiger lilies, look at her knees
instead
They are bare, dust in the creases of her skin – her knee
caps are maps of my childhood,
all bikes and bruises and hunting down imaginary wild
things in the woods out back
Her knees are boney and strong – they don’t need my
helping hands to push them off the earth and allow her to
stand.

The poem I don’t want to write reads the news over my
shoulder in the morning
I turn to her, a challenge, but she just laughs
tells me there’s not a enough time before work and I’m
not saying anything the BBC or NPR won’t say anyway.
she says you can’t, you will sound too country, too white,
too privileged, too young, to have any real knowledge of
the world
She says my doubt is infectious, best to hide it away,
isolate the sickness
She says “you’re voice isn’t strong enough and when you
raise it, you’re not raising an army, you’re just shouting.”
I finish my coffee, put the mug in the sink and head into
the office

The poem I don’t want to write watches me put on
makeup in the evening, pre-date
She has indelible red lipstick, she says this is vital, this
color
she says red is blood, and red is power and red is
dominance
and surely I must need some power painted on me,
because if I was really strong, I would practice the
principles I preach, go out
naked face and flat shoes and fall into the open arms of t
he world, sure they will be there to catch me
But since I tiptoe a tightrope, stretching between my city
sky-scraper-self and a man I hope is an architect, with
building plans in his heart and masonry in his blood -
obviously I need some false convictions to believe in
obviously I need this make-up mask to hide behind
obviously I can’t hold her finger-polished hand to the
page and force out the anger like hot steam congealing
into words – I feel it constricting my middle, at the idea I
have to smile
at the idea I have to “not be such a bitch”
at the idea I should take it as a compliment
at the idea that I do take it as a compliment

the poem I don’t want to write is looming shadows, nights
I can’t sleep, words stopped up in my throat, looking for
signs in the wrinkles of the sheets, hot face warming the
pillow, praying for a prayer to appear in a language I don’t
speak – but will try like hell to learn
She listens
She is not always smiling
she holds my hand
rest, she says
she’ll stay here with me, she says
steady back against my bedroom wall,
until I’m ready to write her down