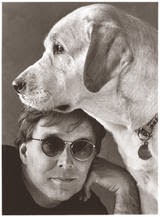 It should be easy to carry the morning on our backs,
The sky weighs less at sunup, but you knew that.
And you knew how the long march
With the heavy wagon... how that story
Became the children -- it's in the milk,
A tin-pail taste before the words began.
You take up a pencil and write:
I've lived in so many towns;
Everywhere, the milk turns
Before it reaches the table.
Then, modestly, you cross out the towns,
Cross out the table, everywhere
is replaced by the morning star.
Milk tastes less of tin,
More of odori, wild herbs
Growing beside the road.

Today begins the celebration of Hanukkah. "Praise for the Yiddish Poets" by Stephen Kuusisto is from his collection Only Bread, Only Light (2000). Stephen Kuusisto is a professor at Syracuse University and speaks widely on the topics of disability, diversity, education, and literature; he is the author of Eavesdropping: A Memoir of Blindness and Listening. At five years old, Kuusisto underwent multiple eye surgeries to correct his crossed eyes. Now with 20/200 vision in his "better" eye, he is legally blind. “I see like a person who looks through a kaleidoscope," Kuusisto writes in his 1998 memoir Planet of the Blind, "my impressions of the world at once beautiful and largely useless.” Letters to Borges, his latest collection of poems, was published by Copper Canyon Press in 2013.
Posted by Word of Mouth