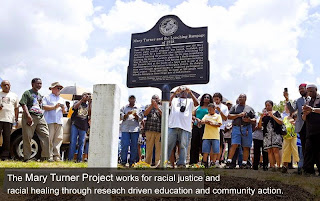 These two poems recall the "lynching rampage of 1918" in which Mary Turner, 20, and Sydney Johnson were two of 13 victims killed in Lowndes and Brooks Counties, Georgia. Mary Turner, pregnant, was burned and hanged on May 19. There is a commemoration on the site of her murder held yearly in Hahira, where the state marker above was erected in 2010. More can be read at the Remembering Mary Turner page, which contains graphic information, violent images, and adult language.

Desperate landowners use the law to relieve
labor shortages. Black men plucked off the streets
to pick blueberries, watched by cruel men.

Hamilton Smith bonded a nineteen year old
dice man for thirty dollars. Sydney Johnson,
with abuse too much to bear

a fever that wouldn't break. Sydney slept
crumpled like an empty burlap
while the fields turned to swill.

"Nigger's get beat on Hamilton Smith's land,
for sleeping" the whip handler named himself.
A whip's snap. A gun's crack, an instant ran

through Sydney like a knife. Suddenly he felt hot
and unsafer than before. He broke berries
running, his tender lungs drowned on humid air.

Butchers wanted to treat his corpse like gristle
but no one could touch him. His skin froze theirs,
Threatened to brittle the houses, and the rope

around his neck while they drug his body bare
for twenty miles on foot. Sydney softened. Skin rubbed
off until he polished and shone glorious.

The mob trudged on with the rope taught:
like Elijah's flaming horses
they had no idea they pulled a comet.

The familiar moon looks pale, like a cornbread
taken out too soon. Pig bones slip and squeak
Against the dog’s teeth, While white Vinegar is exhaled
and inhaled, The two fall asleep.

They fell asleep, facing away from each other
—filling each other chests, rubbing feet—
not knowing that it was to keep each other
Awake, to keep the day from seeping
into the night like the beans in the kitchen
soaking for tomorrows dinner.

So instant was the morning that the sun punched
a hole into the sky, so fast that the they could hear
the blue disk hit the ground, and wobble like a coin
before settling in the the tingling red dust.

In echo they woke up, sweating. He breathed her neck,
She his elbow. Mary had kicked the blanket
off so she could wrap herself in him until
it was time to rise to go to work.

They peeled apart with the small sound skin
separating when it doesn’t want to.