from "On Seeing" -- Chris Mattingly 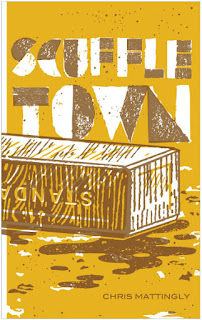 from "On Seeing" -- Chris Mattingly

...Recently, my partner Laurel and I were walking around Savannah, Georgia. We live in rural Emanuel County about an hour away from that town, which we visit nearly once a week. We were sitting on a wooden bench in Wright Square, enjoying the gnarly shade of giant live oaks whose branches reached out across centuries.  Spanish moss dripped down from branches, iron fences, railings, and Tomo-Chi-Chi’s marble monument in the center of the square. A trumpeter played blues to the clank and scuff of horse drawn carriages. The houses, storefronts and public buildings around the square were like a movie set to the antebellum tour guides speaking in a Southern dialect manufactured even by native Southerners. I was talking about my 17-year old nephew when we noticed the clock on the Old Courthouse tower had stopped. We looked at it until it began to actually turn backwards.

Two weeks earlier, my nephew had gotten into a car accident. His best friend suffered a broken neck and died, suffocating next to him. They had been partying—drinking, getting high, and driving fast—things typical to teenage kids, but with a speed and ferocity, even a sense of competition that is common in my family. They were partying hard. Aware of the miracle of my own survival, I’d become scared for my young nephew’s well being. I was scared—not only for what the immediate anguish, guilt, and sadness that would surely ball into a drug coaxed coping—for what would ultimately happen to this boy. I am scared because I was raised in the same family in the same neighborhood of the same depressed city. I was raised with similar lofty expectations and the same self-hatred that comes from not succeeding, from being “a waste,” according to teachers, coaches, and bosses.

My nephew, like me, was raised to know the self-medicating purposes of drugs and alcohol. His mother, my sister, has been using crank and meth since before her son was born, and that drug and its problems has been one of the only constants in his life. More than a handful of times, she has abandoned her son for days, left him to care for his two younger brothers. But on a more regular basis, he has been casually neglected for weeks and months at a time, living at his dad’s crowded house, while his mom just wasn’t around. I don’t know what the better situation is. Already twice in his young life, he has had to stand between my sister and a grown man, both high and trying to kill each other. I wonder how many times he heard the thuds on the floor overhead, the bottles broken, the doors slammed, the bodies smacked and thrown before he found it in himself to climb those stairs and momentarily quiet the violence.

When my sister and I were 14 and 15, our mom began to rekindle a relationship with us. I remember hearing from her on Thanksgiving when I was a sophomore in high school. About a month before, I had been kicked out of the Catholic school that my dad and grandpa had attended. I wasn’t expecting to hear from her that Thanksgiving, but when she said she was at a tavern partying with the family, I figured I’d walk over. The tavern, The Old Kentucky, was only a few blocks away, and I knew there would be family I hadn’t seen in years. But really I think the lure was the drinking and pool playing. I knew that if I showed up in the tavern, it wouldn’t matter how young I was, no one would stop me from taking shots and drinking cans of Sterling Beer. As it turned out, the lure of alcohol and drugs would be the glue for our new relationship with Mom. We went from not seeing her—not even knowing where she was (I thought she lived with our family in Louisiana)—to hanging out with her almost everyday. Soon, she was calling the secretary at school to say we were sick or had a family emergency, and we’d spend the day drinking with her and Curtis.

This was one of the most exciting periods in my life. They were also a volatile, violent, and awakening few years. In the morning we’d smoke weed, listen to music, and make breakfast. While my friends were sitting in English and Math classes, I was sitting at a small table smoking Camels and listening to my mom tell stories. She told me about her daddy getting killed down in Louisiana when she was 8. She told me about finally going back there after being gone for thirty years—after she and my dad split—and how the family welcomed her as causal as if she was getting home from work. How she had tried to see us all those years, but I’d stand up, pull her from the sink where she was talking and doing dishes, hold her close in a clumsy dance to the Pink Floyd or Zeppelin song that was playing on the little alarm clock radio.

One morning, about four years later, I’m lying in bed. It’s after 11 o’clock on a school day, but I’d already decided to quit anyway. So I prop myself up on an elbow and light a cigarette. My mattress is on one of those concrete floors that are in basement. There’s gone-through cardboard boxes full of photographs, dishes, and winter clothes. Some of the boxes are soggy and collapsing from water that dripped in from someplace. One of the boxes has fallen completely open but the clothes have remained standing in a tangled cube. There’s random bike tires, hubcaps, filthy gallon jugs half full of some oily stuff I can’t figure out. Newspapers, a moldy shower curtain, unbreakable plastic whiskey bottles and cigarette butts. I’m piled up in the corner looking at all this when I see it: myself in 10 years.

I’m so lucky it’s not even funny. A college professor? I could’ve stayed at that house and croaked from a heroin overdose like my mom’s boyfriend Curtis. Or been like George who sat on the toilet, put a shotgun to his chest, and blasted his heart out. I could’ve been like Dave and swallowed enough Oxycontin to sink into that concrete floor. I could’ve been Gary borrowing money from a broke 20-year old for something to keep him from shivering.  I could’ve gotten in my car—my eyes aflame with liquor and bewilderment—and rammed my green ‘69 Chevelle 110-mph into a tree. I could’ve been my nephew.

Lying in bed with the lights out, I could be him. He could be me.

CHRIS MATTINGLY was the
featured reader at Athens Word
in June 2015. "On Seeing" appeared online at the website Some Call It Ballin' in 2014. Mattingly played an estimated 2000 games at shortstop and during the 1980’s, his dad would drive him to St. Louis to watch Ozzie Smith field ground balls during batting practice. But today, no one astonishes him like outfielder Yasiel Puig. He admits that he still prefers his Yankee cap, that Dodger blue just doesn’t look as natural on him. Mattingly teaches at a small college in Georgia. His book of poems is Scuffletown from Typecast Publishing. He keeps a ball and glove in the trunk of his car.
Posted by Word of Mouth