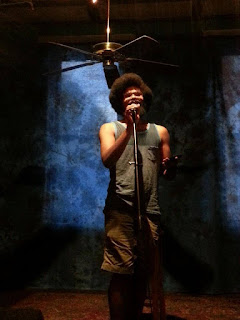 The woods stepped aside from the mob, willfully
live and water oaks and cypress trees ignore
her cries, beggings for her baby. Regretfully

from the pregnancy, ankles itch like chigger
bites from the rope. Her cuts burn and boil
with gnats. Mary could hear nigger nigger

no more. Her thin dress drenched in lamp oil and spit
gasoline, sweat and blood she barely lit,
the cigar took a lifetime to light, to broil

To flake off, to expose the bump. The blade flicked
incited laughter—nervous and intentional.
Her stomach opened like an eye. The boy dropped

a month early, tumbled down the warm hill
of his mother under a boot. The smothered
son was left scattered by a cruel heel

like an emptied pecan shell. Unsatisfied
at the steaming mess, the mob shot
until they were empty and had pulverized.

Mary hung tattered like the Spanish moss that haunts
every tree in the Dirty.