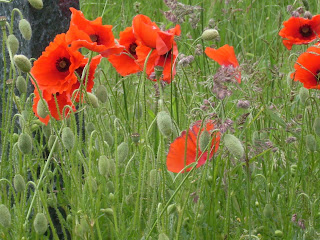 "Memorial Day" - Michael Anania
It is easily forgotten, year to
year, exactly where the plot is,
though the place is entirely familiar —
a willow tree by a curving roadway
sweeping black asphalt with tender leaves;

such fingers kneading the damp earth gently down
on new roots, black humus caught in grey hair
brushed back, and the single waterfaucet,
birdlike upon its grey pipe stem,
a stream opening at its foot.

We know the stories that are told,
by starts and stops, by bent men at strange joy
regarding the precise enactments of their own
gesturing. And among the women there will be
a naming of families, a counting off, an ordering.

The morning may be brilliant; the season
is one of brilliances — sunlight through
the fountained willow behind us, its splayed
shadow spreading westward, our shadows westward,
irregular across damp grass, the close-set stones.

It may be that since our walk there is faltering,
moving in careful steps around snow-on-the-mountain,
bluebells and zebragrass toward that place
between the willow and the waterfaucet, the way
is lost, that we have no practiced step there,
and walking, our own sway and balance, fails us.
"Memorial Day" by Michael Anania appeared in Selected Poems(1994). Of the inner-city Omaha schools where he was educated Anania has said, "Standing up and saying you were a poet would be a little bit like standing up and saying you were a target."
Posted by Word of Mouth No comments: 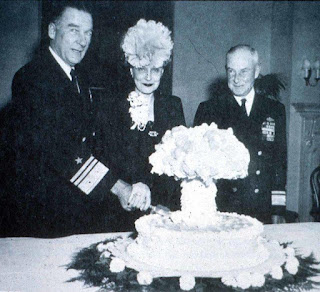 we are so good at war
and war inspired so much art
and music which inspired
us to war also made us hear
how to thread towards war or art...
and your mouth twists so differently
but the same when you say
war or art
rat or raw
how we are the best at war or art
in the universe
makes us human

or want to conquer

all of the oceans


[above photo: celebrating the anniversary of the Bikini Atoll atomic test, 1946. "On November 7, 1946 the bizarre photograph was published as the centerpiece of the Washington Post's society column under the headline 'Salute to Bikini' ... "]
Posted by Word of Mouth 1 comment: 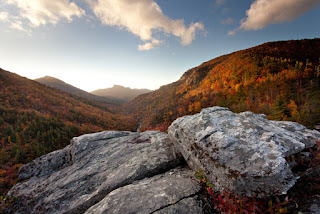 We hike the trail at midnight,
raindrops tattering against
broad-leaved tickseed, brook
lettuce, Carey's saxifrage, tracking
with our lights the muddied cut
tracing a crooked line to Babel Tower,
a flat, broad slab of granite atop
a steep-pitched grade where we make camp
and after salted jerk and water, sit silent,
firelight on our faces, smoothed stone against
our backs. Outside the ring of light
night time presses in,

black above the hips of distant hills,
wind blasts
singing from the canyon, twisting, bent
limbs of cedar sweeping south,
granite face weathered into smooth
cups and dips, seams sketched like scars
across the surface of the rock
while above cold stars settle on the sharp-
tipped pines, geometries of scale—
angles, lines, tangents as we swing
from west to east, lean into night
and ride the spin toward first light,
the slow-ordered music
of true north slowly tilting.


Photograph above by Daniel Burleson: "This is another Autumn image taken from Babel Tower, a popular hiking destination in the Linville Gorge. The two distant mountain peaks are Hawksbill Mountain (left) and Table Rock Mountain (near center). Image Taken on October 20th, 2012."
Posted by Word of Mouth No comments:

"A few rounds on my tab" - M Bromberg 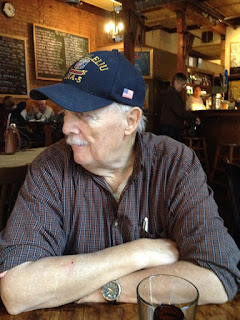 Charlie at The Globe
﻿

"A few rounds on my tab" - M Bromberg

Leukemia, cancer,
platelet counts:
we called you Dracula.
After each infusion
you were alive like no other.

You offered me a ride
to Watkinsville, a 12-pack,
and Lynyrd Skynyrd's "Gimme
Three Steps" turned up
so loud the windows would shake.

I found your name and number
in my wallet,
scrawled on a napkin.
"I'm 75," you laughed,
"don't wait too long."

I should have called.
You had the stroke
Monday in the doctor's office,
never regained consciousness.
When I saw you

at the hospital Wednesday,
sleeping, I grabbed
your arm. "C'mon, Charlie.
Wake up!
Let's go get a beer."

I hope you're putting
a few rounds on my tab.

WORD OF MOUTH is moving to FIRST TUESDAY beginning in JUNE! 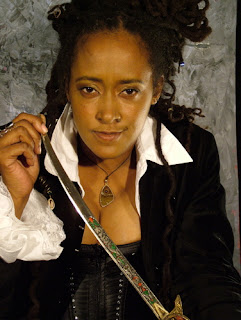 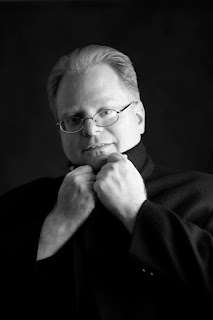 WORD OF MOUTH
IS MOVING TO TUESDAY
BEGINNING IN JUNE

"What a Poem Is, or, a Guide for the Aspiring Poet" - Gregory de Rocher 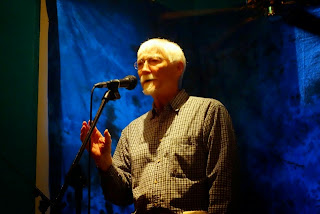 "What a Poem Is, or, a Guide for the Aspiring Poet" - Gregory de Rocher

Every poem is
First and foremost,
About itself,
Sashaying in uncanny ways around
What even a poetry-hater
Feels, fears, wishes, knows to be the case,
Whatever the case might, should, could, must, or ought to be
But is or isn’t,
Was or no longer is, or will never again be, because
Shit happens,
Flowers wilt,
Love sucks, and
We die . . .
Probably with our quivering lips
Uttering the most gorgeous elegy
That will never be about anything
Signifying everything.
Posted by Word of Mouth No comments:

WORD OF MOUTH is moving to FIRST TUESDAY of the month beginning in JUNE!


﻿
Posted by Word of Mouth No comments: 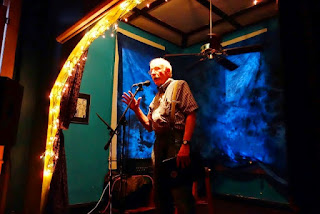 He startled me ten feet away
walking up from the flooding river,
a beautiful raccoon who stopped
to meet my eyes, mammal to mammal.

We stayed suspended without fear
like two old dwellers of one land
with a nod of acceptance, not breaking
the silence with threat of violence.

I marveled at this moment as he slowly
climbed the hill to his next desire,
maybe food or cover from the cold
or a quiet place to settle for death,

and return to the mystery source of all.

I went down to my banal task of cloaking
a lawn mower against impending rain,
enjoying his stark face in black and white,
bringing civility in stillness.

"When the Work's All Done" - Tony Morris 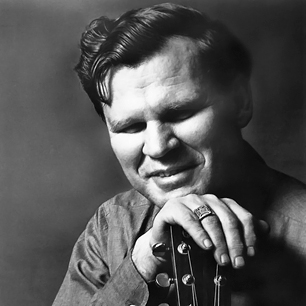 Arthel Lane "Doc" Watson
(1923-2012)
﻿
"When the Work’s All Done" - Tony Morris
~for Doc Watson
Nothing fit together like your fingers on the strings
all wrapped around a voice that rode the rails
of harmony just easy as you please,
high-lonesome tales of murdered mothers,
and midnight’s stormy deep where a solitary
watch you’d keep but there were always others,
like Katie making whiskey, or Johnny making lies
as Frankie shot the man she loved and went away
for life, and if the matter suited, you’d fly
away, dear Lord, on the prayers of sisters,
brothers shouting hallelujah to the skies,
said hallelujah to the skies, and mister,
let me tell you, if the red clay hills were redder
with the blood of miner’s lives, his dark-tongued
songs of coal-black death put a name to all that died,
in the dreams of miner’s daughters, in the prayers
of miner’s wives, strife and sorrow ever after,
till that glad day, by and by, when they’ll fly away
and join them in that home way up on high,
or if the devil did his work too well and played
a trick or two, he’d fiddle on a tune so sly
and well ol’ Satan’s hosts would swoon,
right through the night till morning running
up and down the neck as the blue  moon
of Kentucky rose and set down in the west,
on the banks of the Ohio, over good ol’ Rocky Top
where Shady Grove that pretty girl he’d ever love the best
stood at the door, bare feet on the floor, shoes and stockings
in her hands, and he knew right then he’d marry
that gal, give up his barlow knife, and then he’d dance
and tarry until the day he died, fiddle, and sing‘til the day he died, playing with their curly-haired
baby in that cabin on a hill, said he’d take a chance
with a wife and a son so at the ending of his days
when the work’s all done he’d go down in the valley
to pray, Lord, down in the valley to pray.
Tony Morris, from Savannah, is tonight's featured reader at Word of Mouth. Sign-up for open mic starts at 7 pm and readings begin at 8 pm upstairs at The Globe, corner of Clayton and Lumpkin Streets.
Posted by Word of Mouth No comments: