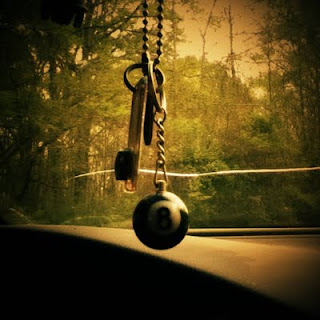 You stole from the man's old home place,


of the refrigerator in the dirt, like a big animal


dragging itself to the woods to die. You hauled


his dead old Chevy to have it crushed for scrap metal,


the wind knocked out of the cab, where the faces


of his first son and his best dog lived passenger-side


in the oily dust air.


So he waited for you.


His wife urged him not to, but he took a blanket


and pillow and put the pistol on a night table by the sofa,


where he slept and spread pimento cheese on wheat bread


with a butter knife, picnics of solitude ending


with a bullwhip lifted, put back down, lifted again,


like a cross gesture over the chest, life or death.


He rose and washed, kept his hair combed,


and made a game of ever lower against the wait,


felt it was not about property, but everything else,


became better because of you, a wall to lean against.


His fence gate made no clank.


But lost meat buzzed in your empty bone,


which was a pipe scraped of marrow, your teeth sucked


loose in the gum, stored poisons tasted in the gaps.


You were the fog over wet grass but angular as a cave painting,


points tumbling over themselves toward a poking.


And when your fingers rode up the door chain,


you could hear him asleep. His presence was the gift, like darkness itself


chuckling with you, lips licked on an upturn. Not property anymore.


Not that kind of drug, some other pilot light at your brain stem,


your gasses put to flame.


But you didn't hear the bee. It's little wings


moved too fast for a swat. And when his hands came clear through the dark,


you also drew, both of you in the doorway at sunrise, or perhaps it was sunset.


long past use, a mouth severed from its body, still biting.
Photo: "Ball," Ben Gulyas
Posted by Word of Mouth