"He was dancing alone one day" - David Oates 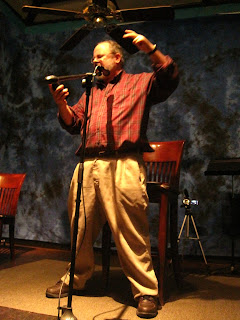 "He was dancing alone one day" - David Oates
He was dancing alone one day, not particularly gracefully, but with pleasure, forgetting himself, letting his body be moved by the music, or so it felt, rather than by his own commands. The music had a catchy beat, the bass line was compelling, and the lead guitar was soaring above it, and in his head patterns of light played, as with his body, following the commands of the music. He was taken over by the music, and his back no longer hurt, he didn't feel the pain in his feet.
One moment he was taken by the music, the next he was the music, no longer attached to that body down below, dancing to him. He felt wonderfully alive, euphoric, perhaps a bit manic, and he flowed from the room with two black chairs and one white table into the street. Instead of being drowned out by the street noises, he found that the city's music was part of him as well, the grumble and whoosh of cars and buses, the sound of thousands of feet striking the pavement, the cooing of a pigeon in a nest on a girder under the El tracks.
When he travelled to the edge of the city, he found that the wind made different noises here, and that insect buzz and bird calls were part of him here, though he was still in the city as well, expanding, becoming the music, the sound of the entire world, across oceans and continents, and as high in the air as sound could transmit, even starting journeys like thoughts transmitted where music in radio waves radiated from the ball of dirt resounding with him.
When they broke down the door, they found a body lying beside two chairs, black, and one table, white. They weren't sure if the look on its face was from the effect of death's dancing in the muscles of the face, or if, for some reason, this splay-limbed man had died with a smile.