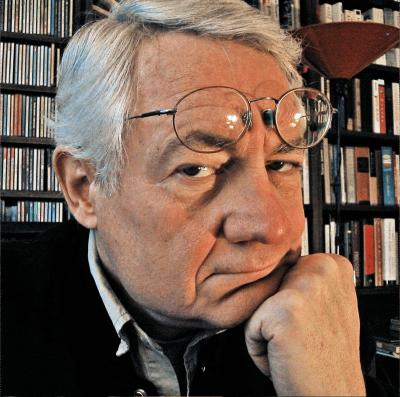 It is at this special time of the year, and especially of this extra-special year in particular, that we realize how urgent is our need to foster love and faith and brotherhood and —at any rate faith, and by that I mean consumer confidence. When Americans, of all people, are afflicted with what the singer-songwriter Roger Miller called “shellout falter”—a reluctance to spend—then the whole world is liable, as Mr. Miller put it so well in his song “Dang Me,” to “lack fourteen dollars having twenty-seven cents.”

Are we going to let it be said that all we had this Christmas to cheer was cheer itself? No! Let’s put the holly back in shopaholic, let’s get jingle-bullish. We owe it to ourselves, to the world, and to future generations. The more presents we spring for now, the lighter the tax burden is going to be down the line.
You notice how much more merrily that last sentence bounced along because I chose spring to express spending, instead of, say, plunge; and lighter instead of, say, less staggering. Words are important. So let’s say “bah, humbug” to b-words like bailout and bankrupt. Let’s digress from anything ending in -ession. Let’s entertain some new, upbeat holiday words.
Why not wake up tomorrow morning feeling consumptious? Rhymes with scrumptious, and approaches sumptuous. When we’re consumptious we’ve got that fire in the belly that’s burning a hole in our pocket. We’re going to be pumping bucks today, we’re going to open our hearts to goods and services, we’re going to take it upon ourselves to help America, and consequently the world, reconomize. In so doing, we can personalize what is just about the only appealing phrase regarding the economy that has emerged this year: each of us can be his or her own stimulus package.
The season of giving is upon us. Need that sound like such a threat? Let’s see if we can spruce up that venerable old word generous, which can be so cringe-inducing when we hear it spoken over the phone by a stranger calling in the interest of a charity. “I hope you will be as generous this year as last” puts us on the spot, so let’s spread generous out.

I don’t think we want to go to heterogenerous, because people might think we’re talking about sex, and there will be plenty of time for that after we get our mercantile heat back on. (For this reason, even businesses whose appeal is essentially spicy should resist, for now, the temptation to send their customers illicitations.) But autogenerous, as in autobiographical, might remind us that giving unto others is also giving unto ourselves, especially if others give back unto us and therefore unto themselves, and we buy our presents at their store and vice-versa. Does auto- strike an ominous note? Let me just say that if each of us becomes a cargiver this Christmas, there will be a lot more shining faces this New Year’s in Detroit. And Japan.
Let us not shrink from taking a look at the word Christmas. It’s a fine old word and I for one would be loath to suggest that it has lost its edge entirely. But it doesn’t exactly sing. The only thing it rhymes with is isthmus, and that but loosely. How do you like the sound of Jingle Day? Says bells and sunshine, says catchy marketing, says plenty of change.

Mingle, tingle, Kringle, Pringles, bling’ll,and hey, sleigh, pray, pay, hooray. We might even go a little more on-the-nose: Ka-chingleday.
And incidentally, when you take your tree down and put your ornaments away for next year (yes, of course there will be a next year, don’t even ask such a question), do you know the best way to protect those ornaments? By wrapping them in newspaper. Several sheets per ornament. Maybe a whole newspaper section per ornament. And magazines and books are good to put between wrapped ornaments for further protection. Not to knock the tissue-paper industry, but what has it ever done for, say, people who support themselves and their families (not to mention the Jingle Day puppies their families have been promised) by thinking up words?

From The Dreaded Feast: Writers on Enduring the Holidays by Michele Clark and Taylor Plimpton (Abrams Image, 2009).
Posted by Word of Mouth