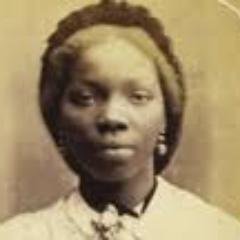 
To Phillis Wheatley,
to whom I owe a debt of language:

To the mother whom the middle passage bore
to a poet's life and the slave's chore
of serving the master's way: stay safe
in an envelope of whiteness. Your face
was unthinkable in the English verse you absorbed.
What you read and wrote of whiteness was adored
by whiteness that praised the refined Negro,
who by some parlor trick read, spoke and wrote
like they do.

You used the master's tools
as if they were your own, and artfully fooled
them to put you on an even, written plane.
Your rebellion unnoticed even in fame.
All they saw was white space,
not black letters on the page.

Now I'm in the National Gallery, banging
rap, watching the Flatbush Zombies chop every
tree from the canvas and roll it, watching
Pusha T rip up lilies and plant the poppy,

while Killer Mike runs the jewels on every duke
and duchess. Oh, original sampler,
this is what you left us to rebuke
the master, with his own tools. The first smuggler

of language, you paved our lane out of whiteness
with whiteness flipped, broke down, and packaged
to a way of speaking without the politeness
that you were shackled to. You showed us how to manage.

We were once tar baby, my black mama
poetess, now we transcend genres.


Sam Lane will be participating in the Indy Author Marketplace and Fair at the Athens Clarke County Library on Saturday, Feb 18. The event begins at 11 a.m. The library is located at 2025 Baxter Street.

Although the date and place of her birth are not documented, scholars believe that Phillis Wheatley was born in 1753 in West Africa, most likely in present-day Senegal or The Gambia. Wheatley was brought to British-ruled Boston, Massachusetts, on July 11, 1761.
At the age of eight, she was sold to the wealthy Boston merchant and tailor John Wheatley, who bought the young girl as a servant for his wife Susanna. John and Susanna Wheatley named the young girl Phillis, after the ship that had brought her to America. She was given their last name of Wheatley, as was a common custom.
At the age of 14, she wrote her first poem, "To the University of Cambridge, in New England." Recognizing her literary ability, the Wheatley family supported Phillis's education and relieved her of the household labor.
Wheatley was strongly influenced by her studies of the works of Alexander Pope, John Milton, the ancient Greek epics of Homer, and the Roman poets Horace and Virgil. In 1775, she sent a copy of a poem entitled “To His Excellency, George Washington” to him, and Washington invited Wheatley to visit his headquarters in Cambridge, Massachusetts, which she did in March 1776. Thomas Paine republished the poem in the Pennsylvania Gazette in April 1776.
Posted by Word of Mouth

that image is not Phillis Wheatley. Take 3 extra seconds to realize that PHOTOGRAPHY WAS NOT INVENTED UNTIL HALF A CENTURY AFTER PHILLIS WHEATLEY DIED. Irresponsible and harmful.

This is a photo of Sara Forbes Bonetta Davies who was given to Queen Victoria as a gift in 1850 when she was seven years old. The photo was taken in 1862 when she married James Pinson Labulo Davies. Phyllis Wheatley lived from 1753-1784 before photography was developed in the 1840s. There are no photos of Phyllis Wheatley.