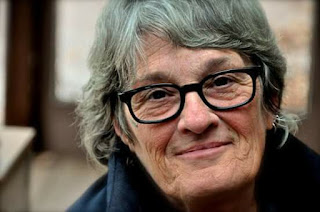 Suddenly, the strange world is less strange,
quieter, stranger. The wheel is turned,
the finger pricked, the spell will not break.
Shhh. Listen up to what is missing:
The sound of doors locking in the dark
or unlocking. Words placed like long-stemmed
flowers in the barrels of silence.
A mouth. A voice. Beautiful. Bruised.
Friend. I did not know you long or well.
My arc was altered by our meeting.
I forced my feet into these odd shoes
and, limping, dance, clumsy and comfy.
Your cheek kissed by some goddess of storm,
you showed us, brood of anonymous
geniuses, to follow our footsteps.

Above the Ohio far away
sun and cloud are making a movie.
Backs to us, a woman leads a mule
toward the river, in step, through the
hush of mist over the bottomland.
My tongue tries to keep up, slithering,
a blind baby snake with no purchase
on the damp grass they tread so surely,
then stumped by the dross they have sloughed off:
Fabric, leather, a plow, a pump, books
and bandages and empty bottles,
a feedbag, all passing into earth
like a long outbreath of the Buddha.
On the other shore, lights and music.
“Aralee, old friend,” the boatman says,
“The mule rides free. From you a penny.”
Her jagged, full-force laugh. No problem.
From the skinny pockets of her coat
her practiced hands bring forth a lifetime:
A bib. A doll. A slingshot. Apples.
Dog treats. Cigarettes. Keys. A Zippo.
Colored pencils. Makeup. Photographs. . . .
The boatman’s eyes are big as the moon.
The river and the mule pulse gently.
The patient ferry rocks and drowses.
The woman’s laughing and the treasure
from her pockets look to have no end.
He thinks, she can’t go on. She goes on.
Brittle brown letters. A flashdrive fat
as a bullfrog. Laden vines of film
stock. Drawings. Sketches. Glitter. Stardust.
And, covered in script like fingerprints,
paper, papers, folded or in scraps,
an avalanche of words, shy children,
wadded ones unwadding in her hands.
She pauses, mother hawk sizing up
the fitness of a chick. “Not this one.
This one’s for Mark.” Thanks for one more gift,
generous Aralee, this poem,
written in the lightning from your face. 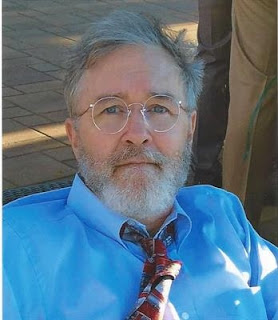 Mark Pentecost, 64, died January 16, 2017 in Athens, GA, surrounded by his family. The cause of death was ALS, also known as Lou Gehrig's Disease. During two years of illness he demonstrated amazing courage, graciousness, and generosity of spirit for caregivers, family and friends.
Posted by Word of Mouth