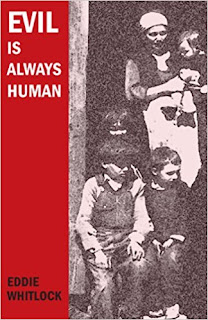 The characters are on their way to see a public hanging in 1912. The children, riding on back of a mule-drawn wagon, are talking.
“Why they hanging him?”
“He killed his wife and his two little girls right after Christmas,” Gladys told us.
Little Carl was listening to her, having a pretty good day that day. “Why did he do that, Gladys?”
The truth is that Gladys didn’t know at all why the man killed his wife and them two little girls, but Gladys was good at thinking and she thought up a good story and we didn’t much care whether it was true or not, as long as it was good.  You just had to catch her in the mood to talk.  She weren’t always in such a mood.  Some days she would be all blowed up like a bullfrog and wouldn’t say nothing to nobody but Mama and then it weren’t but a word or two.
I was right glad she was in a talking mood that day.  “He was crazy,” Gladys told us.  “He said the devil had got into them.”
We didn’t go to church, but we knowed who the devil was.  The devil was who folks blamed when they done something bad and got caught at it.  I didn’t much figure it was the devil getting into folks as it was folks just getting caught and wanting to blame somebody else for it.  You see that a lot.

An excerpt from Evil is Always Human by Eddie Whitlock. He is October's featured reader at Word of Mouth open mic at The Globe. Sign-up for open mic Wednesday, October 4 is at 7 pm at the bar and readings start at 8 pm upstairs.
Posted by Word of Mouth