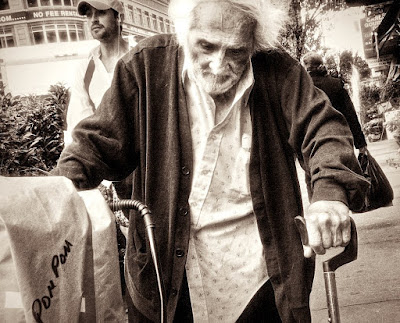 The only member of the King Lear
Glee Club and Dancing Society
meets this morning on a bus stop bench
in the Kroger parking lot to perform
the Off This Mortal Coil Shuffle.
His hair is ruffled,
his mouth is agape in an empty O—
O! O! O! O!—
while only his own fingers
play on his xylophone ribs.

He rises to scuttle crabwise among the Pontiacs
and Chryslers, peering into their windows
to sneer at the food wrappers and baby seats,
occasionally keying a perfect car door
with a precisely inscrutable line.  He bends
to see his hair-choked face in a side view mirror
and weeps to find it there.

The grocery store draws him in
and he makes his entrance with stiff pride—
the magical doors open at his kingly command—
but no one looks.  He bellows, retreats,
going out to go in again, sure this time
that the muzak plays for him,
that the florescent lights shine to ennoble his royal brow,
that the silver linoleum has been laid for his own bare feet.

He orders his sullen subjects to shop,
to pick vegetables and push carts,
to edge away from him in silent awe
and well-deserved respect as he stomps
and titters, rehearsing the arguments
proving his divinity—which is evident
in the cereal aisle where angels find bran flakes,
in the meat and poultry section where he sees signs
forked into the bare bodies of dead animals,
in the perfumed pharmacy stinking of corporeal decay,
in the candy treats on shelves too low to reach,
for what sane king would bend for mere sugar,
and in the narrow-eyed stare of his fool
who gathers baskets and mocks his own mockery with secret love.

Or does he?  What is the bottom of mockery,
where is its top?  Peel back the ordered linoleum tiles
and the abyss crouches, scissor open the roof
and find empty air, entangle the nerves with bargains,
and you will save nothing.

He stumbles outside where a storm gathers
above the automobiles.  I forgive you, lightning,
he mutters, but not that bitch Cordelia.
By his mad decree the winds roar
the sky boils and the clouds hurl their cataracts
till the power lines snap.
And then the darkness comes. 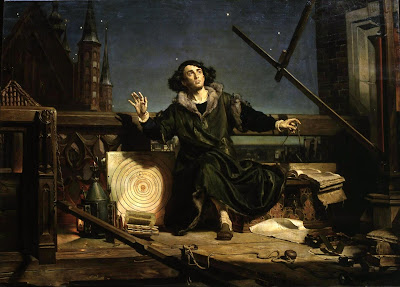 "A Weekend Concert for Copernicus" - Joey Connolly
“Listen dear readers with your eyes and ears
And you shall hear the music of the spheres;
Cosmic cha cha for millions of light years
Use your imagination to shift mental gears.”


THE  FIRST COSMIC CONVENTION CONCERT
(the bands you'll miss on gravity-free Friday)
Red Shift and the Sonic Boomers
Martin Marietta and the Boeing Boeings
General Relativity and the Theorists
The Cosmic Cupcakes
Neut Rino and the Boson Particles
Professor Astro Cat’s Frontiers of Space
Simon L. Taneous and the Super Novas
Todd O’Globo & the Globular Clusters
Doctor Dud and the Dwarf Star Thuds
Red Giant and the Yellow Suns
Lead Boots and the Lunar Landers
The Duke of Drones with the Martian Rovers
Plutocrats Redux and the Planetoids
Singularity & the Thresholds
COSMIC CONVENTION CONCERT II
(bands on Saturn’s Day)
Galileo and the Galaxy Girls
The Milky Wayvers
Sailor Star and the Hawk Kings
The Oristas of Everything
Orbit Elliptico & the Copernicans
Asteroid and the Meteorites
Sunny Saturn and the Ringers
Tobor and the 8th Dimension Dudes
Iggy Imploder and the Big Bangers
Astral Project - Alive and On the Inside
Heavy Waters and the Light Years
Gravitas with Ambient Pressure
Dark Matter and the Right Stuff
Dirk Energy and the Unknown
COSMIC CONVENTION CONCERT III
(closing the concert stage on the day of the Sun)
The Doppler Gangers
Scrunch Up the Photons
Quirk Quark and the Fibonacci Storks
Trans Planckian and the Timestoppers
Kepler’s Katzenjammer Kids
Tycho Brahe & the Silver Nose String Band
Feynman’s Future Four
The Jetsons' Jug Band
My Favorite Martian Music Band
Interstellar Overdrive
Buck Rogers Photon Energy Band
Atomicritus and the Anti Particles
Fang Lizhi and the Celestial Dragons
Hubble’s See Farther Sextet
Nicolaus Copernicus was born in Poland on 19 February 1473. [The painting: "Astronomer Copernicus, conversation with God" / "Astronom Kopernik, czyli rozmowa z Bogiem" is by Jan Matejko, 1873]
Posted by Word of Mouth No comments: 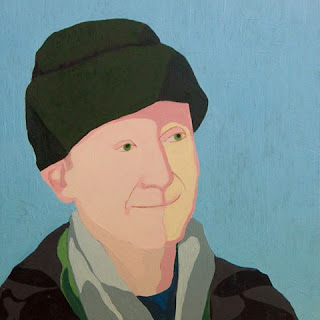 
It was just an old field. I have been back

more than once, perplexed
at how very ordinary in the light
of midafternoon, or morning,
or the light-not-light of gloaming. It’s gone.
Whatever was is not now. It seems
a shame, the untame rush replaced
by shrug and stolen glance
at time, the slow ride home
for reheated leftovers to sustain
my aging. It was fall
when I went wandering

blazed paths through pungent hush
of hickory, beech and white oak stands
to forest edge at right-of-way, cut
straight across the curve of hills where
I stood blinking back the light
by the sun-splashed shores

of an old field grown wild
breaking over asphalt slabs
which once went somewhere
beyond the post hole fence
that vainly holds back green
swells of sumac and thistle
tangled in turbulence
sparkling in the silent roar
of  a thin place
opening
onto an emerald sea
in the presence of which
I would remove my shoes
wash my soul in sunlight
and float the timeless warmth
a new heaven
and a new earth
But that was all and over soon, just slant

of light and insect drone, no still small voice
that could be heard above the buzz
and background trill, so was it somehow up
to me to say out loud what hangs in air?
All flesh is grass, its beauty as
the flower of the field
that dies with fall – been said by better
than one who wanted just right then
no more than now and this sweet earth
of distant laughter, lovers strolling,
stoic mother gently holding
sleek cell phone and squirming child. Right

there beneath the freshening breeze
a shadow passed inside of me:
You hear your heart
not that of mine.
I found it best to follow back
the well-worn path that’s cut around.
I did not hear then a voice –

there was no other voice but mine –
just jumbled words set in my mind
like taking sun and sending roots, like
softening ground and healing scars,
flowers dying, weed fields thriving. Who
can say where words come from
but now I really want to know
did Moses ever think to go
back to bush to watch for fire
and hear the holy words again?
He did not deign to verify,
went down to Egypt, back to reeds,
to sea, to Sinai, but for me:
What I know I know too well, like

what the ways of science tell,
so some fall soon I will return.
I’ll go back armed with leather bound
field guide to flora, open mind to watch
weeds. Perhaps I’ll learn their proper names –
the way cool starry night fuzzy top vine
must be known to a branch of botany. Perhaps
I'll catch the roar, and this time listen
to the silence inside.
[portrait of Bob Ambrose by David Noah]

"And then a hot dog made him lose control" - Rob White 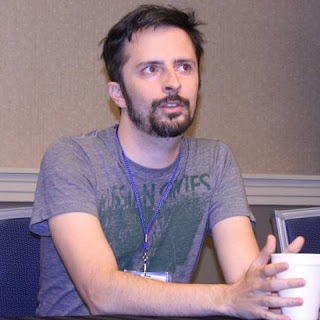 "And then a hot dog made him lose control" - Rob White


I ponder and philosophize and wonder about the way of things


I struggle with the epic problem of mankind's direction


There's hope there despite the darkness


But one bit of painful mystery stands between us and nirvana

What the fuck is a hot dog?

Woe is man that we could create such a thing


And into the infernal morass of "why the fuck not?"

It is neither a dog nor is it often hot


Would it be any better if it were actually dog?


So why in the hell do we name this salty meat after them?


The geese are nature's assholes, so why should we feel guilt at naming our culinary mistakes after them?

This unholy meat is so bland and non-descript that we have to slather it with other shitty substances in order to disguise the self loathing we must feel for having created such a thing.


"Why am I covering it in liquids bearing the hue of the crayons my five year old eats?"


"What has happened to my life and am I a slave to the fickle whims of predetermination?"

My biggest question, perhaps, is this:


Is my fate, indeed, already sealed?


For I know that come Labor Day, or June or before


I'll be standing on some middle-class white dude's back porch


Talking shit about local politics I do not know shit about


And wondering when the meat's done


Held ever out of reach behind the adequate convenience


Of this rolled up, grease-covered decepticon posing as a sausage


I'll scoop it up and pop it on a paper plate, careful not to spill my solo cup

For a brief instant, I'll hear the wisdom of my greater angel whisper in my ear asking why?


Why must man destroy itself?


Why can we not cast down our chains and transcend the prison of consciousness?

I will tell that voice to shut the hell up and pass the mustard.
Posted by Word of Mouth No comments:

"For the twice dead" - Gail Tyson 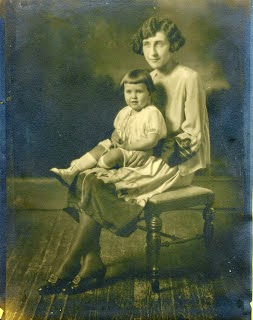 Fog wraiths sweep across the road,
swathe our car, headlights hurdling
two-lane blacktop past Amish farms,
shuttered taverns, towards our hotel.
Grudge-hoarder, phone-slammer, my mother
sleeps five miles and five years away.
Her mind, riddled with holes, has made
us whole, can no longer dredge up times
I enraged her, thinks the remote
is a phone. Tonight I’ll listen
to my husband breathing, recall
all those who died to me before:
fellow travelers who swore they’d stay
in touch, best friends who moved too far—
kinship stretched eggshell-thin until
the day I hear, by chance, they are dead—
and her, the parent who cut me off.
Tomorrow we will roll away
affronts that entombed regret, years
wasted that nonetheless thickened
my soul, that help me bear our coming
together, her coming death,
that make love denser than before.
Posted by Word of Mouth No comments: