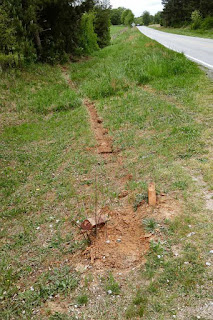 
so this guy, swerving,
smashed his pickup into our mailbox
splintering its post,
and ran himself to ground in the ditch by the road


he came out talking so fast
no calamity would ever catch him again
if he talked that fast
if he just explained to someone
that he’d once been in a coma for forty-eight days
because they thought it was a stone
but his appendix had burst
and he lifted up his red t-shirt to show me the belly band
he wore because his stomach muscles
had been whacked by the blast
except this one, he said
touching a small spot on his side

but it was his daughter who worried him right now
the one who was the first West Nile virus victim in this state
—this said with a wry proud smile—
and now she’s in the hospital, where he was going,
because his other daughter had died in December, 1997,
and I’m blessed to have this one, I know that,

what kind of post you want to replace this one, he asked
I got a bunch with different colored stains
light, dark, oak, whatever you want
get it back here tomorrow
what time does your mail run
but I knew he was asking someone else
to tell him when the final mailbox
was going to leap right in front of his goddamned truck
Posted by Word of Mouth